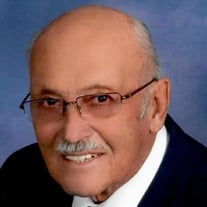 Obituary Brodhead – Dr. Ronaldean “Dean” Pawlisch, age 94, passed away on July 24, 2019 at the Woods Crossing Nursing Home in Brodhead. Dean was born on July 14, 1925 in Baraboo, WI the son of Benjamin and Myrtle (Deyhle) Pawlisch.  Dean was united in marriage to Leah (Gaetzke) Pawlisch on June 22, 1951 in North Freedom, Wisconsin.  He was a graduate of North Freedom High School in 1943.  Following graduation he served two years in the United States Navy and was honorably discharged in 1946 from the submarines with the rank of Gunner’s mate 3rd class. On discharge, he attended the University of Wisconsin Madison and subsequently was awarded a Bachelor’s Degree in Animal Science in 1950.  In 1954 he was granted his Doctor of Veterinary Medicine degree from the University of Minnesota.  He began a dedicated lifetime profession of Veterinary Medicine at Brodhead Veterinary Service in Brodhead in 1954 and continued until his retirement in 1991.  In an effort to support and strengthen his profession, he took an active part in many areas.  Locally he served as chairman of the Corn and Hog festival for several years, chaired the Farm Institute, was awarded an honorary membership to the FFA in 1956, served as FFA alumni president and helped establish the 4H program in Veterinary Science in Green County.  He also worked on the Ag advisory board at Brodhead High School and the Green County Ag Chest. He helped organize the “disease free” hog program in our area. He was president of the Rock Valley Veterinary Association and on the WVMA Executive board for 4 years in 1963-1966 and was chairman in 1966.  He was director of the Wisconsin Association of Professions in 1965-1967.  He served as president elect and president for the Wisconsin State Veterinary Association from 1969-1970.  He cooperated with the University of Wisconsin in research programs and consequently he was instrumental in discovering the first documented case in the world of the transmission of swine influenza from pigs to a healthy normal human on the same farm and in the same episode.  In 1994 his service to the Brodhead area and his cooperation with researchers at the college of agriculture and life sciences earned him an honorary recognition award from the College of Agriculture and Life Sciences, one of the highest honors bestowed by the college.  He served on the board of directors for the Wisconsin Agriculture and Life Science Alumni Association from 1988 – 1994.  Dean was appointed and served on the task force for the Veterinary Medical Animal Health Diagnostic Laboratory support services in 1988-1990. His dedication and service also extended to his Brodhead community.  He was a Jaycee President and general chairman of the Red Cross Bloodmobile when it was organized in the Green County in 1960.  He was mayor of Brodhead in 1962-1964.  In 1975 -1976 he co-chaired the Brodhead Bicentennial Committee.  The Jaycees presented him with the Distinguished Service Award in 1979.  He was a member of the American Legion, Gehr Swan Post 197, where he served as commander and adjutant for 15 years.  He was elected as a director at the Bank of Brodhead and served from 1972 to 2011.  Dean was an avid hunter and sportsman and was a longtime supporter of wildlife and conservation programs. Dean worked with Ducks Unlimited, Pheasants Forever and was also a member of the Sugar River Pheasant Club. His faith in God led him to be an active member in the Juda Baptist Church in Juda from 1955 until it closed in 1990.  He held various offices, taught Sunday School and sang in the choir.  At the present time he was a member of the Brodhead United Methodist Church and sang in the choir for many years. Dean is survived by three children, Ray (Carol) Pawlisch, Deb (Paul) Chotlos and Kim Pawlisch; 5 grandchildren,  Benjamin (Andrea) Pawlisch, Dean (Joanna) Pawlisch, Anna Chotlos, Nathaniel Chotlos and Matthew Chotlos; 6 great grandchildren, Audrey, Sam, Owen, Everett, Magnus and Truman. Dean was preceded in death by his parents, his wife, Leah on October 10, 2013 and one brother, Deyhle Pawlisch. In lieu of flowers, memorials can be made to the Brodhead United Methodist Church or the Sully Fund: providing veterinary care for animals in need. Memorial services will be held at the Brodhead United Methodist Church on Monday, August 5, 2019 at 11:00 AM.  A visitation will also be held at the church on Sunday, August 4, 2019 from 2:00 PM to 5:00 pm and on Monday from 10:00 am until the time of services.  Burial of cremated remains will be held at the Greenwood Cemetery with military honors.                   DL Newcomer Funeral Home To send flowers to the family or plant a tree in memory of Ronaldean "Dean" Pawlisch, please visit our floral store.

The family of Ronaldean "Dean" Pawlisch created this Life Tributes page to make it easy to share your memories.

Send flowers to the Pawlisch family.