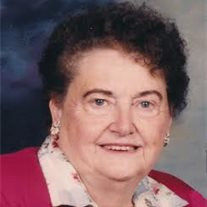 Rosemary Flynn, 93, passed gently into eternal rest on Saturday, May 27, 2017, and joined her husband, Tom. Rosemary was born November 30, 1923, in Magnolia, the daughter of Talbot and Rose (Heffron) Drew. After graduating from high school, she worked at Parker Pen in Janesville for a number of years. Rosemary married Tom Flynn on June 9, 1945, at St. Augustine�s Catholic Church in Footville and was especially proud to be marrying another of Irish descent. During their 67 years of marriage, they worked side by side in their endeavors. These included the opening of �Flynn�s Tap� in Albany in 1960, �Flynn�s Bar and Restaurant� in Brodhead in 1963, and �Flynn�s Bar and Restaurant� in Monticello in 1974. They may be most remembered for their Friday Night Fish Fry. Rosemary worked many long hours in their family businesses and also at home caring for their seven children. After their children were grown, Rosemary accompanied her husband to several conventions across the country while Tom held the position of President of the South Central Wisconsin Tavern League for 25 years, President of the State Tavern League beginning in 1981, and President of the National Licensed Beverage Association starting in 1987. But, their favorite and most memorable trip was to Ireland. Rosemary was a very compassionate and generous person. If she was aware that any patrons had no place to go on a holiday, they were invited to the Flynn home to join her family. She was also known to give away a few meals from time to time in their establishment. She always put others before herself and could find good in everybody. Rosemary is survived by four sons: Richard (Cathy) Flynn, Brodhead; Dan (LaVon) Flynn, Oregon; Michael Flynn, Ft. Walton Beach, FL; and Thomas Flynn, Jr., Bloomington, IL; two daughters: Rosalie Clark and Ann (Tom) Richmond, Brodhead; 15 grandchildren; 21 great-grandchildren; one great-great grandchild; one sister-in-law, Sis Drew, Janesville; and one brother-in-law, Jim Flynn, Janesville; and several nieces and nephews. She was preceded in death by her husband, Tom, in 2012; son, Patrick, in 2003; parents in 1950; daughter-in-law, Rena; four brothers and sisters-in-law: Jim (Margaret), Tom (Doris), Daniel (Dard), and Joe; and three sisters and brothers-in-law: Margaret (Mike) Collins, Mary (Sam) Saevre, and Charlotte (Ed) Dunn. Rosemary had a quiet demeanor, but a strong presence. She will be greatly missed. Visitation will be held at 9:30 a.m., Wednesday, May 31, 2017, followed by a Mass of Christian Burial at 11 a.m. at St. Rose Catholic Church, Brodhead with Father Michael Moon presiding. Burial will follow in Greenwood Cemetery. Friends and relatives are invited to a luncheon in the church basement after the interment. The Newcomer Funeral Home, Brodhead, is assisting the family. The family would like to express their heartfelt thanks to Steve, Jodi, Vicki, and staff at Caring Hands for the compassionate care and friendship they provided our mother during the time she was there.�Also, thank you to Monroe Clinic Hospice for their support and help in her final days. An Old Irish Blessing May the road rise up to meet you. May the wind always be at your back. May the sun shine warm upon your face, and rains fall soft upon your fields. And until we meet again, May God hold you in the palm of His hand.

Rosemary Flynn, 93, passed gently into eternal rest on Saturday, May 27, 2017, and joined her husband, Tom. Rosemary was born November 30, 1923, in Magnolia, the daughter of Talbot and Rose (Heffron) Drew. After graduating from high school,... View Obituary & Service Information

The family of Rosemary (Drew) Flynn created this Life Tributes page to make it easy to share your memories.

Send flowers to the Flynn family.