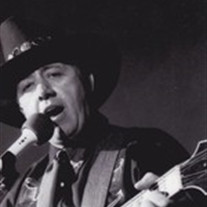 Brodhead - Roy �Chuck� E. Blake, age 81, of Brodhead, passed away on Friday, September 21, 2012, at the Monroe Manor Nursing Home. He was born on July 4, 1931 in Oak Hill, WV, the son of Lawrence and Lena (Johnson) Blake. He married Pam J. Fairbert on September 27, 2003 in Hanover, WI. �Chuck�s� entire life was about country music. He was happiest when he was on-stage performing and entertaining. He was a true showman/entertainer, and lead guitarist and vocalist in the country music field. His love of music started at a very young age and continued on for most of his adult life - it was a real love story for both. Chuck sang and played the old traditional Grand Ole Opry favorites and rubbed elbows sometimes with some of the country legends; Ernest Tubb, Loretta Lynn and Jeannie C. Riley. Roy is survived by his wife Pam and his five children from a previous marriage; Brenda (John) Kreutzer, Tim (Theresa) Blake, Sheila (Ryan) Hunkins, Lisa (Fred) Kopshinsky, Claudia Blake; three sisters, a brother, eight grandchildren, ten great-grandchildren, and other family and friends. He was preceded in death by his parents, four brothers, a sister, and a great-grandson. Funeral services will be held at noon, Tuesday, September 25, 2012, at the D.L. NEWCOMER FUNERAL HOME, BRODHEAD, WI, with Paul Kline officiating. Burial will be in Greenwood Cemetery, Brodhead. Visitation will be held on Tuesday from 11 a.m., until time of services at the funeral home.

The family of Roy "Chuck" E. Blake created this Life Tributes page to make it easy to share your memories.