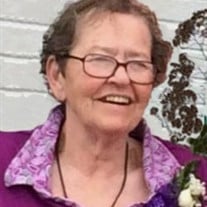 Ruth Ann Nelson, age 72, of Orangeville, IL, formerly of Monroe, WI, lost her battle with brain cancer, surrounded by her family, on Tuesday, July 8, 2014. She was born on May 10, 1942 in Monroe, the daughter of Ottis J. and Norma E. (Jones) Thompson. She married Thomas Nelson on June 13, 1964 and was blessed with her only child Dorrene. At the age of two, Ruth Ann lost her daddy in a motor vehicle accident. She then lived with her family on a farm outside of Albany, WI where she was the eldest of six children. She attended Peebles School and graduated from Albany High School. Her passion for caring for others carried over in to her career as a CNA in the OB Department at St. Clare Hospital, Monroe, WI for 30 years. In 1995, she retired from St. Clare Hospital to tend to her mother. After her mother passed away, she moved in with her daughter to care for her three grandchildren. Following the birth of her great-grandson, she then moved in with her granddaughter to continue her passion for caring for her loved ones. Ruth Ann is survived by her daughter, Dorrene (Michael) Martin, Orangeville, IL; three grandchildren, Kailee (Brandan) Hager, Edgerton, WI, Kassandra and Chase Martin, both of Orangeville, IL; two great-grandchildren, Easton and Lennon Hager; two sisters, Barbara (Dick) DeVoe, Brodhead, WI, Beth Weiss, New Glarus, WI; a brother, Danny (Sherry) Blumer, Albany, WI, a sister-in-law, Ruth (John) Jackson, El Dorado, KS; and many nieces and nephews. She was preceded in death by her parents, Otis Thompson, Norma and Roy Blumer, a brother, Terry Thompson, a sister, Jane Johnson, and brothers-in-law, Gerald Weiss and John Johnson. Visitation will be held on Sunday, July 13, 2014, from 4-6 p.m. at the D.L. NEWCOMER FUNERAL HOME, BRODHEAD. Funeral services will be held at 11 a.m., Monday, July 14, 2014, at the funeral home. Burial will be in Hillcrest Cemetery, Albany, WI.�

Ruth Ann Nelson, age 72, of Orangeville, IL, formerly of Monroe, WI, lost her battle with brain cancer, surrounded by her family, on Tuesday, July 8, 2014. She was born on May 10, 1942 in Monroe, the daughter of Ottis J. and Norma E. (Jones)... View Obituary & Service Information

The family of Ruth Ann (Thompson) Nelson created this Life Tributes page to make it easy to share your memories.