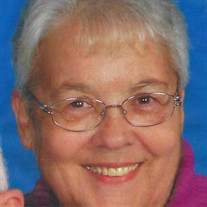 Davis, IL - Sally Jo Rockey, age 77, passed away on January 5, 2022 at the Freeport Memorial Hospital. Sally was born on September 27, 1944 in Freeport, IL the daughter of Edward and Ruth (Bohanon) Neberman. She married Richard “Dick” Rockey on April 18, 1964 in Rock Grove, IL. Sally enjoyed reading and retired after 30 years as the Dakota High School Librarian. She was a founding member of Faith Community Church in Davis, where she attended various bible studies and was very active in volunteering for the pregnancy center for the Rockford Rescue Mission. But most of all, Sally enjoyed spending time with her family, especially watching her children and grandchildren play sports and attending all of those sporting events with Dakota High School. Sally is survived by her husband, Dick Rockey; 3 children, Brian (Brenda) Rockey, John (Rikki) Rockey and Mark Rockey; 5 grandchildren, Callina (Zachary) Updike, Kendalynn Rockey (Kendall Cox), Wyatt Rockey, Case Rockey and Taylor Rockey; one sister, Kay Kunkle and numerous nieces, nephews, other relatives and friends. Sally was preceded in death by her parents. In lieu of flowers, memorials can be directed to the family in her memory. The family requests that everyone be dressed casual or in your favorite sports attire or Dakota sports attire for Sally’s services. Funeral services will be held at the Faith Community Church, 212 W. McKinny Street in Davis IL on Monday, January 10, 2022 at 12:00 PM. A visitation will also be held at the church on Monday from 10:00 AM until 12:00 PM Noon. Burial will conclude at the Rock Grove Cemetery. The DL Newcomer Funeral Home in Brodhead is assisting the family. www.dlnewcomerfuneralhome.com 608-897-2484

The family of Sally Jo Rockey created this Life Tributes page to make it easy to share your memories.

Send flowers to the Rockey family.