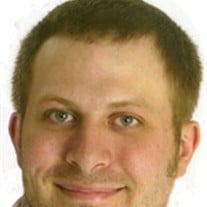 Brodhead - Scott Daniel Risum, age 29, of Brodhead, passed away on Monday, August 9, 2010, at his home. He was born on November 15, 1980 in Monroe, WI, the son of Ronald L. and Rita R. (Pickett) Risum. Scott lived in Brodhead all of his life. He graduated from Brodhead High School in 1999, where he was an accomplished wrestler. He worked for Kuhn-Knight Manufacturing of Brodhead for many years and was a wrestling coach for the Brodhead Junior High and Orfordville-Parkview Schools. Scott also loved hunting. He is survived by his father, Ronald (Julie) Risum, mother, Rita (Jeffrey) Jubie, two daughters, Emma and Isabella Risum, Leah Risum and her children, Zach and Kailee Denzer, a brother, Chad (Erika) Risum, a niece, Ava, Godparents, Paul and Jean Clark, all of Brodhead, and his dog, Gable. He was preceded in death by his paternal grandparents, Dale and Lila Risum, and maternal grandfather, Glenn Pickett. Funeral services will be held at 11:00 a.m., Saturday, August 14, 2010, at the Bethlehem Lutheran Church, Brodhead. Burial will be in Greenwood Cemetery, Brodhead. Visitation will be held on Friday, August 13, 2010, from 5:00 p.m. until 8:00 p.m., at the D.L. NEWCOMER FUNERAL HOME, BRODEAD. A memorial fund will be established.

The family of Scott Daniel Risum created this Life Tributes page to make it easy to share your memories.

Send flowers to the Risum family.