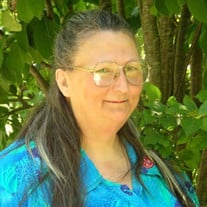 Sherrie Ann Haines, age 63, of Orfordville, WI, passed away on Thursday, June 29, 2017 at U.W.�Hospital, Madison, WI. She was born on January 10, 1954 in Janesville, WI, the daughter of George F. and Jeanette (Merrick) Oliver. She married Dan Haines on July 14, 1973 in Littleton, CO. Sherrie graduated from Orfordville High School in 1972. She was a homemaker and an accomplished seamstress, enjoying baking, quilting, weaving, spinning, and any other type of needle work. She loved spending time with her grandchildren. She is survived by her husband Dan; children, Tim (Lydia) Haines, LeRoy Haines, both of Janesville; two brothers, Ed Oliver, Evansville, WI, LeRoy (Kari) Oliver, WI; and three grandchildren, Gabriella, Seth and Zoee. She was preceded in death by her parents and a daughter Linda in infancy. A Memorial Service will be held at 11 a.m. on Monday, July 10, 2017, at the Footville Church of Christ, Footville, WI, with Rev. John Thomson officiating. There will be no visitiation.

The family of Sherrie Ann (Oliver) Haines created this Life Tributes page to make it easy to share your memories.

Sherrie Ann Haines, age 63, of Orfordville, WI, passed away on...