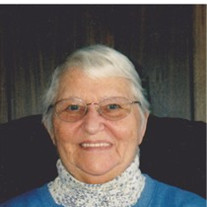 Shirley M. Scheidegger, age 75, of Brodhead, passed away on Saturday, June 14, 2014, at her home. She was born on September 18, 1938 in Janesville, WI, the daughter of Benart and Elva (Thostenson) Anderson. She married Sherman D. Scheidegger... View Obituary & Service Information

The family of Shirley Mae (Anderson) Scheidegger created this Life Tributes page to make it easy to share your memories.

Shirley M. Scheidegger, age 75, of Brodhead, passed away on Saturday,...