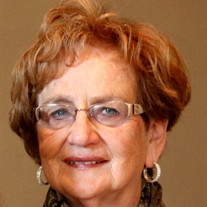 Shirley Mae (Sellnow) Purdue, age 73, of Brodhead, passed away peacefully at the Monroe Clinic Hospice Home, Monroe, WI on Tuesday, December 5, 2017, following a courageous battle with breast cancer. She was born on April 22, 1944 in Monroe, WI, the daughter of Roy and Helen (Broughton) Sellnow. She married Stanley Purdue on August 30, 1964 at the Faith Lutheran Church, Monroe. Growing-up on a dairy farm on Rechsteiner Road, Albany, WI, Shirley attended Searles School and graduated from Albany High School in 1962. She was employed by the Green County Treasurer's Office, the Register of Deeds, and Zoning, retiring in 2008. Shirley had also worked with her husband in their business, Purdue Masonry, for 50 years. She enjoyed cooking, entertaining family and friends, and was always one of the first to deliver food and kind words to someone in need. She enjoyed playing cards, dancing,�gardening, the�Wisconsin Badgers, but her greatest love was caring for her grandchildren. She is survived by her husband, Stanley; two sons, Dan (Jeri) Purdue, and Kent Purdue, both of Brodhead; three grandchildren, Cora, Carisa and Grant Purdue. She is also survived by a sister, Carol Foesch, Brodhead, WI; a brother Don (Ardelle) Sellnow, Monroe, WI; a niece, Doreen (Scott) Rosheisen and nephews, Al (Meggan) Foesch and Eric (Tammy) Foesch. She was preceded in death by her parents, a niece, Karen Indergand, a nephew, Kenny Sellnow, and brother-in-law, Bill Foesch. Funeral services will be held at 11 a.m., on Monday, December 11, 2017, at the Albany United Methodist Church, Albany, WI, with Rev. Tom Moe officiating. Burial will be in Hillcrest Cemetery, Albany, WI. Visitation will be held from 2:30 p.m. until 6:00 p.m. on Sunday, December 10th, at the church. A memorial fund will be established.�

The family of Shirley Mae (Sellnow) Purdue created this Life Tributes page to make it easy to share your memories.