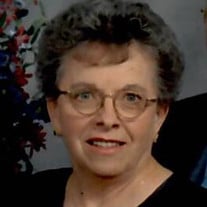 Obituary Brodhead - Shirley Sue (Streiff) Gray passed away on January 10, 2020, in the comfort of her home and surrounded by her loving family.  She was born on December 27, 1933, on the family farm Northwest of New Glarus WI. She was the daughter of Peter and Dorothy Streiff. She graduated from New Glarus High School in 1951. She worked in Madison for the state for a short time, then was married in 1952 to Arthur Colvin and lived in Monroe while she raised her children. Later, she met and married Norman Gray on Sept. 1, 1978.  They lived in the Monroe area before retiring and moving to Arkansas for eight years. They returned to Wisconsin in 2001, settling their home in Brodhead, WI. She worked as a waitress at the Monroe Chocolate Shop, Monroe Country Club and the Swiss Wheel Inn. She also worked at Swiss Colony, Pauley Cheese and Monroe Cheese Corp. Shirley enjoyed cooking and baking, earning the nickname, “The Cookie Lady”.  She also enjoyed fishing and decorating and volunteering at her church. She loved her family and her precious “westie”, Sammy. She was preceded in death by her parents, one sister and brother in-law, Audrey and Bill Higgins, brother in-law Richard O’Neill and in-laws, Clarence and Grace Slotten. Shirley is survived by her husband of 41 years, Norman Gray, five children, sons, Jeffery (Dawn) Colvin, Wausau, Michael (Tianna) Colvin, of Monroe.  Daughters, Julie (John) Sheppard, Madison, Diane (Kevin) Dundee, Orangeville Il, and Cory (Ron) Czarny, Cary Il; a sister, Lynn (Richard) O’Neill of Naples, FL;  Twelve Grandchildren, grandsons, Chad (Tonya) Colvin, Christopher (Jessie) Colvin, Jonathan (Chloe) Perdue, Eric (Darcy) Dundee, Chris Czarny and Ryan (Trisha) Sheppard. Granddaughters, Necia (Joe) Colvin-Beausoleil, Alexis (Chris) Hayes, Ashley Colvin, Marsha (Brandon) Wirtjes, Katie Czarny and Amanda (Kevin) Peterson.  She is also survived by six great grandchildren and her dear friends of 60 years, Cal and Jean Wickline with many good times remembered. In lieu of flowers, memorials can be directed to the family in her memory. Funeral services will be held on Saturday, January 18, 2020 at 11:00 AM at the Congregational United Church of Christ, 201 E. 23rd Street in Brodhead.  A visitation will also be held at the church on Saturday from 9:30 AM until the time of services.  Burial will conclude at the Greenwood Cemetery in Brodhead.           The DL Newcomer Funeral Home is assisting the family with burial.  897-2484  www.dlnewcomerfuneralhome.com To send flowers to the family or plant a tree in memory of Shirley Sue (Streiff) Gray, please visit our floral store.

Obituary Brodhead - Shirley Sue (Streiff) Gray passed away on January 10, 2020, in the comfort of her home and surrounded by her loving family.  She was born on December 27, 1933, on the family farm Northwest of New Glarus WI. She was the daughter... View Obituary & Service Information

The family of Shirley Sue (Streiff) Gray created this Life Tributes page to make it easy to share your memories.