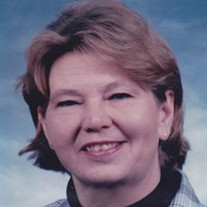 �Susan �Suzie� K. Clark, age 62, passed away from a sudden illness on Sunday, May 3, 2015, at UW-Hospital, Madison, WI. Suzie was born on May 2, 1953, the daughter of Richard D. and Phyllis (Royce) McKinney. She had been married to Tom Clark. Suzie had many jobs, including managing a restauraunt, bartending, babysitting, and working at the Brodhead Piggly Wiggly. She was a very special person who touched the hearts of many. She always helped in any way that she could and even opened her house up to those who needed a place to call home. Suzie loved with everything she had. She enjoyed gardening, drawing, singing, but most of all, spending time with her family. She spent her Birthday surrounded by her children and grandchildren, enjoying sparkling juice and cake that the nursing staff so graciously brought to her in a room filled with cards, flowers, balloons, and an abundance of love. She left behind a great legacy of people who cared greatly for her. She is survived by a son, Christopher (Theresa) Clark; a daughter, Melissa (Jason Erickson) Clark, both of Brodhead; grandchildren, Ashley, Clayton, Christen, Chandra, Kylie, Ravyn, and Adelynn; her mother, Phyllis McKinney, Monroe; four brothers, Mike (Sue) McKinney, Madison, Kevin (Karen) McKinney, Beloit, Brian (Shari) McKinney, Delavan, and Tim McKinney, Janesville, as well as many loved nieces nephews and their children. She was preceded in death by her father, Richard �Dunk� McKinney, and nephews Bobby Armstrong and Zachary McKinney. Visitation will be held from 5 p.m. until 7 p.m., Friday, May 8, 2015, at the D.L. NEWCOMER FUNERAL HOME, BRODHEAD, WI. A Celebration of Life will held on Saturday, May 9, 2015, from 2 p.m. until 4 p.m. at The Brunch-Box (Cardinal Lanes), Brodhead, WI. In lieu of flowers, a memorial fund will be established. Suzie received exceptional care from the Monroe Clinic Hospital and the UW-Hospital. Her family would like to send a big thank-you out for the amazing care she received from the TLC Unit Staff as well as the Palliative Care Staff at the UW-Hospital.

The family of Susan "Suzie" K. (McKinney) Clark created this Life Tributes page to make it easy to share your memories.