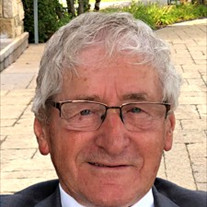 Obituary       Thomas Dwight Newcomer, 84, passed away on June 8, 2019 in Orfordville, doing what he loved to do, staying busy. He was born December 13, 1934, in Janesville, Wisconsin, the son of Dwight and Marie (Laube) Newcomer. He was the oldest businessman in Orfordville, having been a funeral director owning and operating Newcomer-Silverthorn Chapel on the Hill for the past sixty-two years.      As a little tyke, he roamed the streets in Brodhead and wandered over to the neighbors, who took him fishing. His insatiable appetite for sweets was created with the smell of donuts wafting through the air from his neighbor’s home, and continued with his mother Marie making a fresh pie that was on the table every day at noon. That appetite never left.      He was a graduate of Brodhead High School, Class of 1953, where he was active in sports, basketball his favorite, and was a short, but fast, impressive, and effective guard.      Tom and Beverly (Fairman) were married on June 25, 1955 in the Brodhead Methodist Church. Their love affair spans 72 years, starting when Tom was 13 in the eighth grade. Plans were in progress to celebrate their 64th wedding anniversary this June. Many of their anniversaries were celebrated on cruise ships from Hawaii and Alaska in the west, to Croatia in the East, and the many countries in between.      As an active member of local communities, Tom served on the Orfordville Fire Department for many years, and received an EMT award.      He was a member of the school board during the time of consolidation of Orfordville and Footville schools, which became Parkview School District      He was also a former president of Decatur Lake Country Club.      Tom had a nurturing relationship with the youth in the community. A group of young boys came to the house one day and asked if Tommy was there. They wanted him to coach them. He did, and made champions out of their basketball team. The love between coach and team continued through the years. As a parent he coached his son’s little league team for many seasons.      Tom and Beverly also own and operate Fairman-Newcomer Rental Properties, Maggie’s Vacation Rentals, and previously Newcomer Appliance, Brodhead, and Busy Grill, Orfordville. They operated Newcomer Ambulance Service for many years, and Tom and she were 2 of the first EMTS trained to serve the area. They were instrumental in the formation of Orfordville Fire Protection District EMS. Tom and Beverly were honored to be Parade Marshalls for June Day Celebrations.      His morning ritual was to solve all the local issues with friends at Sathers for many years, and more recently in Footville.      His love for golf and hunting spanned nearly 60+ years. Boating, snowmobiling, and downhill skiing were activities enjoyed with his family. He was a pro at non-stop puttering, and he had a great talent for that. He could FIX just about anything, and enjoyed the challenge. His last breath was taken while puttering.      He is survived by his wife, 4 children, 13 grandchildren and 3 great granddaughters. Tambrey Sue (Ronald) Tambourine, Lake Forest, Illinois, and their children: Amy, Ronnie (Pamela), Elizabeth (Scott) Huckins, Ryan (Shannon), and Thomas (Kimmie); their grandchildren: Morgan, Liliah, and Payton; Tomasan Harnack, Brodhead and The Villages, FL. and her children, Tianna, Tate, Tabitha, Tad; Tracey Lou (Richard) Hoehl, Litchfield, IL and their children, Sydney and Spencer; Todd Stuart (Deborah), Sun Prairie and their sons, Thomas and Michael, “Bonus” daughter, Kay (Dennis) Marinelli, Beloit; brothers Richard (Betty), Monroe, and Daniel (Kari), Brodhead; and sisters-in-law; Shirley Fairman, Brodhead, and Laurel Tinkle, Jefferson. many nieces and nephews, and great nieces and nephews.      Tom was preceded in death by his parents, Dwight and Marie Newcomer; his in-laws, Marvin and Clara Fairman; brother-in-law Donald Fairman, and son-in-law Ronald Harnack.      Tom’s presence in the community, and especially among his family will be greatly missed.      A visitation will be held at Newcomer-Silverthorn Chapel on the Hill, Hwy 11 and South Coon Island Road, Orfordville on Thursday, June 13, 2019 from 2:00 p.m. until 7:00 p.m.      Funeral services will be held at the funeral home at 3:00 p.m. on Friday, June 14, 2019 with Msgr. Duane Moellenberndt officiating. Dinner will be served at the funeral home following the service.       Private family burial will be Saturday in Greenwood Cemetery, Brodhead, Wisconsin.      A memorial in Tom’s honor will be established.           To send flowers to the family or plant a tree in memory of Thomas Dwight Newcomer, please visit our floral store.

Obituary       Thomas Dwight Newcomer, 84, passed away on June 8, 2019 in Orfordville, doing what he loved to do, staying busy. He was born December 13, 1934, in Janesville, Wisconsin, the son of Dwight and Marie (Laube) Newcomer. He was the... View Obituary & Service Information

The family of Thomas Dwight Newcomer created this Life Tributes page to make it easy to share your memories.

Send flowers to the Newcomer family.