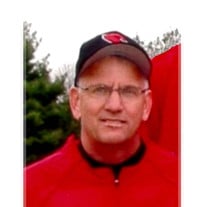 Obituary      Thomas R. Nipple is now “safe” at “home” in the arms of Jesus.  He was born on July 2, 1960 in Monroe, WI, and died at home on June 18, 2019.  Tom was the son of Lawrence and Joyce (Zimmerman) Nipple.  He married the love of his life, Andi Vogel, in 1997.        Tom graduated from Brodhead High School in 1978 and from the U.W.-Platteville in 1982.  He had worked for the Brodhead Power & Light Co. for 27 years before retiring.  He had a sincere love of baseball.  Tom pursued his dream of being a minor league umpire and succeeded.  He loved coaching baseball and enjoyed coaching his own kids along with many other teams through the years, including Brodhead-Juda high school teams.  Refereeing basketball was another passion of his.  He was chosen to referee at the Wisconsin High School State Tournament.  Tom was a member of the Stateline Officials Association.  He was also an active member of St. Peter Evangelical Lutheran Church, Brodhead, serving as a council member and groundskeeper.       Tom will be forever remembered by his loving wife Andi; his children, Alex and Luke; mother Joyce Nipple; brother, Dennis (JoAnne) Nipple; sisters, Janelle Sugars and Lorri (Kirk) Pinnow; along with many nieces, nephews and grand-nephews.  Tom was preceeded in death by his father, Lawrence Nipple, a daughter, Ellen, and brother-in-law, Jeff Vogel.      Services will be held at noon on Monday, June 24, 2019, at St. Peter Lutheran Church, Brodhead.  Visitation will be held from 10 a.m. until the time of services at the church. Burial will be in Greenwood Cemetery, Brodhead, WI.  A memorial fund will be established.   To send flowers to the family or plant a tree in memory of Thomas Randal Nipple, please visit our floral store.

The family of Thomas Randal Nipple created this Life Tributes page to make it easy to share your memories.

Send flowers to the Nipple family.