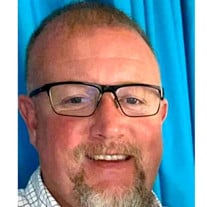 Obituary Tony E. Zimmerman, age 46, of New Glarus, passed away on Sunday, June 20, 2021.  He was born on June 22, 1974 in Rockford, IL, the son of Richard and Kathryn (Brown) Pike.  He married Sheridy Lund on March 27, 2004 in Brodhead. Tony was a maintenance technician for Emmi Roth of Monroe, WI. He had been recognized as the American Legion ‘Firefighter of the Year’ for the Brodhead Fire Dept, District 1 and State of Wisconsin in 2016. More recently, Tony had been a firefighter for the Fitchburg, WI Fire Department.  Tony had served in fire service and an EMT for 28 years.   Tony enjoyed camping, fishing, was an avid hunter, appreciated a good sunset, travel, cooking, and also liked to work with his hands watching a project develop.  He was a jack of most trades and could build or fix most things.  Most important part of his life was the love of his family, including his nieces and nephews.    He is survived by his wife Sheridy, his mother, Kathy Galvin; children, Tanner (Danielle Zuleger), Isabelle, Isaac, and Eloise Zimmerman; a sister, Katrina (Steven Krause) Zimmerman; and in-laws, Ginger and Randy Riese.  He was preceded in death by his father, maternal grandparents, and a son Turner.   Funeral services will be held at 11 a.m., Monday, June 28, 2021, at the Living Word Church, Brodhead, WI.  Visitation will be held from 2-5 p.m. on Sunday, June 27, 2021 at the D.L. Newcomer Funeral Home, Brodhead, WI.  A memorial fund will be established.  Online condolences may be made at www.dlnewcomerfuneralhome.com To send flowers to the family or plant a tree in memory of Tony E. Zimmerman, please visit our floral store.

The family of Tony E. Zimmerman created this Life Tributes page to make it easy to share your memories.

Send flowers to the Zimmerman family.