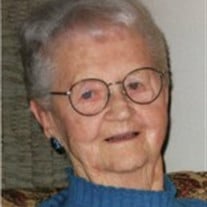 Violet Ardys Johnson, age 98, peacefully passed away on Monday, December 20, 2010, at the home of her daughter in Manassas, VA. She was born on August 15, 1912 in Lone Rock, WI, the daughter of Leonard Fritz and Johanna (Michel) Fritz. Her family moved to Richland Center when she was a baby. She married her classmate, Dale Johnson, and they celebrated their 73rd Wedding Anniversary shortly before his death in 2008. Vi graduated from Richland Center High School and Richland County Normal. She was always active in sports - softball, bowling and her favorite sport, golf. She was the first woman to have a hole-in-one at the Richland Center Course. She continued to play golf after moving to Brodhead and was the Women�s Champion several times. Vi was employed with Commonwealth and General Telephone Company at Richland Center and with General Telephone Company after she and Dale moved to Brodhead. During their 60 years in Brodhead, Vi also worked as a secretary and bookkeeper for the Ties Oil Company and McManus Oil Company until her retirement in 1977. Vi and Dale enjoyed traveling and often made trips to see their daughter and family at military posts around the world. She was a member of the Brodhead Historical Society, The VFW and American Legion Auxiliaries and a former member of the Decatur Lake Country Club. Vi and Dale were affiliated with the Congregational United Church of Christ in Brodhead. She is survived by her daughter Sonya (Roger) Wichelt, Manassas, VA, two grandchildren: Steven (Cyndi) Wichelt, Manassas Park, VA, Vicki (Russ) Topping, Chantilly, VA, four great-grandchildren: Hunter Wichelt, Brielle Wichelt, Christopher Topping and David Topping, and several nieces and nephews. She was preceded in death by her parents, husband, a sister Carol Moon and two brothers, John and Loren Fritz. Graveside services will be held at Greenwood Cemetery, Brodhead at a later date. Memorials may be made to Capital Hospice, 10530 Linden Lake Plaza, Suite 200, Manassas, VA 20109 or the Congregational United Church of Christ, 204 East 23rd St., Brodhead, WI.

Violet Ardys Johnson, age 98, peacefully passed away on Monday, December 20, 2010, at the home of her daughter in Manassas, VA. She was born on August 15, 1912 in Lone Rock, WI, the daughter of Leonard Fritz and Johanna (Michel) Fritz. Her family... View Obituary & Service Information

The family of Violet Ardys (Fritz) Johnson created this Life Tributes page to make it easy to share your memories.