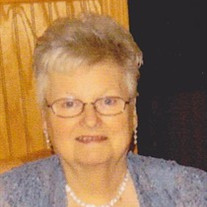 V. Joann Henry, age 78, of Brodhead, WI, formerly of Orfordville, WI, passed away on Wednesday, August 26th, 2015, at Woods Crossing Nursing Home, Brodhead. She was born on September 17th, 1936 in Joliet, IL, the daughter of Charles and Anita (Elmore) Phillips. She married Robert �Bob� Henry on October 9th, 1954 in Lockport, IL. He passed away on January 1, 1990. Joann and her husband farmed near Orfordville from 1972 until 1990. She was a member of the United Congregational Church of Christ, Brodhead and very active in the Spring Valley 4-H. She also enjoyed crocheting, traveling, and spending time with her children and grandchildren. She is survived by her daughter, Jodie (Perry) Johnson, Brodhead, WI; a son, Jerry (Paulette) Henry, Orfordville, WI; five grandchildren and eleven great-grandchildren. She was preceded in death by her parents, husband, two brothers and four sisters. Funeral services will be held at 11 a.m., Friday, August 28th, 2015, at the D.L. NEWCOMER FUNERAL HOME, BRODHEAD, WI, with Pastor Krystal Goodger officiating. Burial will be in Orfordville Lutheran Cemetery. Visitation will be held from 10 a.m. until time of services at the funeral home.

The family of Vivian Joann (Phillips) Henry created this Life Tributes page to make it easy to share your memories.