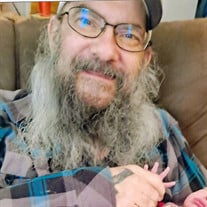 Brodhead – William Richard Sarow, age 63 passed away on April 13, 2022 at the Meriter Hospital in Madison. William was born on June 25, 1958 in Stoughton, WI the son of Frances Sarow. William married Lou Ann Ostenson on September 15, 1984. William worked for over 32 years as a welder at Knight Implement, now Kuhn North America in Brodhead. William loved watching the Green Bay Packers and NASCAR and his favorite driver was Dale Earnhardt. He also enjoyed Doctor Who, Star Trek, Dragon Ball Z, and Sportscenter and the news. He loved spending time working on his cars, but he especially enjoyed spending time with his family and his grandchildren. William is survived by his wife, Lou Ann; 5 children, Chris Sarow, Tim Sarow, Tony Sarow, Jonny Sarow and Katrina Sarow; 4 grandchildren, Lillian, Makenna, Naomi and William; his mother, Frances Hanson; one sister, Jody (Bob) DeSchepper and many other nieces, nephews and other relatives and friends. William was preceded in death by his daughter, Kristina Sarow in 2003. In lieu of flowers, memorials can be directed to the family in his memory. Funeral services will be held at the DL Newcomer Funeral Home, 1105 E. 9th Avenue in Brodhead on Saturday, April 23, 2022 at 1:00 PM. A visitation will also be held at the funeral home from 10:00 AM until the time of services. Burial will conclude at the Greenwood Cemetery. www.dlnewcomerfuneralhome.com 608-897-2484

The family of William Richard Sarow created this Life Tributes page to make it easy to share your memories.

Send flowers to the Sarow family.