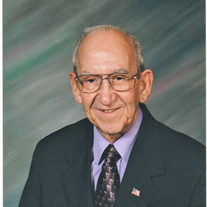 William W. Smith, age 90, of Brodhead, formerly of Durand, IL, passed away on Tuesday, July 11, 2017, at his home. He was born on June 29, 1927 in Marion, IA, the son of Loyd A. and Mary Etta (Washington) Smith. He married Margaret Marie Port on June 8, 1947 in Marion, IA. Bill graduated from Alburnett High School, Alburnet, IA, in 1945. He served in the U.S. Army for two short terms, at the end of WWII in 1945 and during the Korean Conflict. He began his banking career at a Rockford, IL bank in 1946, and became CEO of the Durand State Bank, Durand, IL at its inception in 1957. He served on the original Board of Directors in 1956 until January, 1998, when he retired as an honorary director. He was the CEO from the banks opening on February 1, 1957, semi-retiring on December 31, 1983, remaining as president through 1988. He served as an Independent Contractor at the Durand State Bank from 1998 through 2006, serving as director of public relations and advertising. He was recognized for 50 years in banking by the Independent Community Bankers of Illinois in 1996. Bill was a life member of the American Legion, Gold Star Post 676, Durand, IL. Bill had been a member of the United Methodist Church of Durand for over 40 years, serving on various committees, and becoming a member of the Indian Grove Country Church, Rock City, IL in 2001. He was a member, and a past master of the Durand Masonic Lodge #302 and a member of the Valley of Freeport Scottish Rite Bodies. In 1984, Bill began a part-time auto sales position at Ayres Chevrolet, Pontiac, Buick, Brodhead, WI. He had also served on the city of Rockford Planning Commission and the Durand Village Boards. Bill is survived by his wife Margaret; his children, Barbara (Joel) Carlson, Scott (Laurie) Smith, Roger (Sherri) Smith; 10 grandchildren and several great-grandchildren. He was preceded in death by his parents and a daughter, Beverlee Sue Phillips, in 1978, a sister, Loyda Hohlfelder, and a brother, Milton Smith. Funeral services will be held at 11 a.m., Saturday, July 15, 2017, at the Indian Grove Country Church, Rock City, IL. Visitation will be held on Friday from 5 p.m. until 8 p.m. in the Community Room at the Durand State Bank, Durand, IL. A Masonic Service will follow the visitation at 8 p.m. ? ? Memorials may be made to the Monroe Clinic Hospice, the Monroe Hospital Foundation, or the�Indian Grove Country Church, Rock City, IL.

The family of William Washington Smith created this Life Tributes page to make it easy to share your memories.