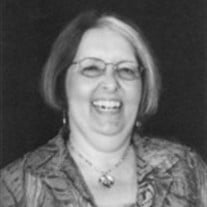 Brodhead - Yvonne Mae (Potratz) Clark of Brodhead, passed away on Saturday, April 3, 2010 at Select Specialties Hospital, Madison, WI. She was born on October 12, 1948 to Orville and Beulah (Rodrek) (Potratz) Binder in Oshkosh, WI. She married Donald L. Clark on July 19, 1969 and they have always resided in his home town, Brodhead, WI. Yvonne�s education was entirely in the Oshkosh Public School System. She graduated from Oshkosh West High School in 1966. Following graduation, she was employed by Wisconsin National Life Insurance Co. for 3 years. Yvonne was employed as a sewing machine operator for 11 years at Apco Mfg. in Brodhead, and when they closed, she went to work for the Simmons Mattress Co., Janesville, and remained there for 10 years. Yvonne enjoyed sewing, quilting, cooking, traveling, and playing Solitaire and Free Cell on the computer, but most of all, she �just loved being with people.� She was a member of the Albany United Methodist Church since 1981. She was also a member of Green County Homemakers and HCE, Brodhead Quilt Group and the Women�s Accountability Group. Most people who knew Yvonne also knew that she was affected all of her adult life by poly cystic kidney/liver disease. In 2005, as a result of this disease, she was the recipient of a kidney from Roxan Nordeng, a loved friend, for which she, her husband and her family were always grateful. Following the transplant, she was able to enjoy a more comfortable life and was always engaged in helping and assisting others. On August 14, 2008, Yvonne was a recipient of a liver, another one of her organs that was affected by the disease. Following this procedure she was confined to the hospital for over one year. After a brief time at home in the fall of 2009, she was again hospitalized after a fall. Not enough appreciation can be expressed for all the care, attention and assistance given by the doctors, nurses, therapists and staff while confined at the University of Madison Hospital and Select Specialty Hospital for so many longs months. Yvonne is survived by her loving husband, Donald L. Clark. Other survivors include sisters, Janice Klimke, Fond du Lac and her son, Rev. Scott (Julia-Sprenkler) Klimke and daughter, Amy (Bill) Bremer and their children, Morgan, Nathan, Logan, Landan and Nolan Bremer, Marilyn (George) Storey of Englewood, FL, and their daughter Audrey and her daughter, Christyna; Judith (Paul) Mohr of Plymouth, MN and their sons, Jere� (Leah Gruhn) and Preston; Phyllis (Carl) Seekins of Menasha, WI. She is also survived by �the only daughter they never had,� Courtney (Mark) Lueck and their sons, Koby, Koen, and Karson. She is further survived by Kenneth (Sharon) Clark and their daughter Valeria and sons, Perry, his son Josh, Scott(Kris); Jeff and his son Sean, Arlyn (Connie) Clark, their daughter Andrea and son Christ (Rachel) and their daughters, Jossie and Cassie, a special cousin, Kathie (Loren) Riemer and their children, Renae (Andy) Daehl, their children Abby and Rachel, Bryce (Jen) Riemer and their children Elianna and Kalena, a cousin, Russell(Nancy) Atkinson, special devoted friends, Darrell and Eunice Clark, step-siblings Richard (Linda) Binder, Gloria (Vern) Slife and other various relatives including aunts and cousins. She was preceded in death by both of her parents, step-father, Adolph Binder, and one brother-in-law, Allen Klimke, as well as many aunts, uncles and cousins. Funeral services will be held at the Albany United Methodist Church, 105 Mill Street, Albany, WI 53502 on Wednesday, April 7, 2010 at 11:00 a.m. with Pastor Patricia Soddy officiating. Visitation will be from 9:00 a.m. until time of services. Burial will be in the Greenwood Cemetery, Brodhead. Memorials may be given to the Albany United Methodist Church Building Fund in memory of Yvonne Clark. �My first business is to so live that at least a few will thank God that I lived when my little day is done.�

The family of Yvonne Mae Clark created this Life Tributes page to make it easy to share your memories.

Send flowers to the Clark family.